While working on another project, I picked up a package of little plastic monkeys at a thrift store. I only need four, but I ended up with one hundred. It’s terribly wasteful to dispose of monkeys, and put them on a shelf for some later use.

What to do with a Plastic Monkey

I recalled a passage from the seminal RE/Search book Pranks! (#11) by V. Vale, where he interviewed Boyd Rice:

Vale: Tell me a little about Steve Thomsen.

Rice: Steve used to carry around these plastic babies in his pockets–always. Where we’d go he’d leave them. He’d leave them in cream containers in restaurants so people pouring it into their coffee would eventually get one of these little plastic babies. He’d wedge them between the stones in the walls of restaurants so people sitting down would suddenly catch a glimpse of this itsy-bitsy little baby… 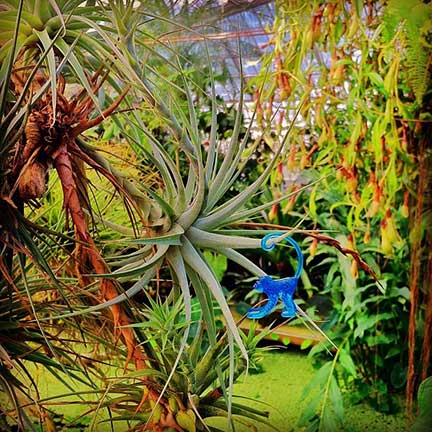 There was my answer: always have a pocketful of monkeys and set them free in delightfully hidden locations. The joy was discovering these pieces of plastic in unexpected spots. Finding the monkey is understanding that there was an act of intent, but the reason is unclear, and that becomes the mystery. Not knowing why becomes a riddle.

The pieces themselves are mass-produced baubles; nothing of great value, but fascinating in detail. The plastic monkey stands about an inch and a half tall, there is quite a number of features set within this tiny sculpture. Being translucent, it picks up light giving off highlights and producing depth. Similar to the effect of diamonds, it’s how light casting on the object interfaces upon the exterior and within.

Using a layered technique in Adobe Illustrator and setting the transparency for each element, it’s possible to capture how the light pours through the plastic and reflects off the surface. Each layer builds upon the other, as illustrated below.